The Yama Yoga Sudio is located in the main building of the Ryugugake Cottages within Ryugugake Park, in the Higashi Iya (East Iya) area of Miyoshi City in Tokushima Prefecture.

For detailed information for visiting the area, please check the IyaTime webpage.

Address:  438-3 Tsurui, Higashi Iya, Miyoshi-shi, Tokushima-ken
**If you are using a GPS car navigation system, please be careful with inputting this address, because it often leads to an incorrect final destination. Therefore, please use the map and directions below after passing the Kazurabashi. (from step 4.)

To Yama Yoga Studio in Ryugugake Cottages:
1. From Ikeda/places North,East,West Shikoku: go south on National Road 32 from Ikeda (central Miyoshi City), about 30 minutes to Oboke.
(it is possible to take Prefecture Road 32 from Iya-Guchi in Yamashiro. This is a scenic road though the valley, but it will take 15-20 minutes longer. Once in central Nishi-Iya, start from step 3.)
At Oboke, turn left at the traffic light onto RT 45.

1. From Otoyo/Kochi, South Shikoku : go north on National Road 32 to Oboke, about 30 minutes from Otoyo I.C.
(it is recommended to NOT take road 439 from Otoyo because it has many narrow turns crossing a mountain pass and it will take much longer.)
At Oboke, turn right at the traffic light onto Rt 45.

2. Take Rt 45 for 15 minutes up the mountain, through the long tunnel, and down into Nishi-Iya Village (follow signs for “Kazurabashi”). In Nishi-Iya, Rt 45 will become Prefecture Road 32 just after the gas station.

3. About 3 or 4 minutes after the gas station, the “Hotel Kazurabashi” will be on the left side. About 100 meters after the hotel, make a sharp left turn to continue on Rt 32 and follow the signs for “Tsurugi-san" / "Tsurugi Mountain”. (if you go straight here you will go to the Kazurabashi parking area.)

4. The road starts to become narrow here, and sometimes it will be only one lane.  About 10 minutes after the Kazurabashi area you will pass  through a small tunnel about 100 meters long ("Oshima Tunnel") . After another 5 minutes you will pass through a second longer tunnel (“Ryugu Tunnel”) that is about 500 meters long. Immediately after the exit of this second tunnel you must quickly turn right, so reduce your speed as you near the exit. (If you pass the car repair shop then you went too far.) There will also be a sign after the tunnel for “Ryugugake Cottage” and "Yama Yoga".

5. After 100 meters turn left, and go down a narrow road and across the bridge. Go up the hill on the other side and turn right, following the signs for “Ryugu Park” and “Manpu Lodge”. Go 300 meters to the parking area. The Yama Yoga Studio (in the Ryugugake Cottage main building) is on the right (**this final 300 meter road is not on Google Maps or many GPS systems**).

Total time from Ikeda or Otoyo is 1 hour. 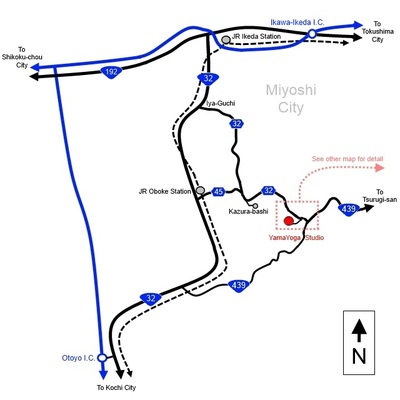 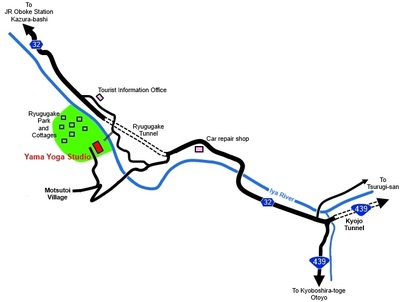